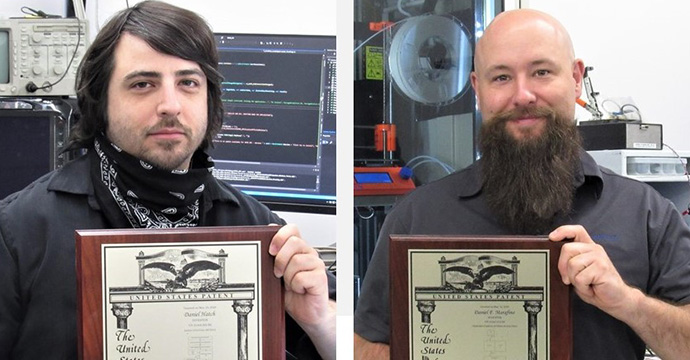 The patent that I was recently awarded is based on a method I developed for Peachtree City to perform out-of-vehicle updates to multiple Panasonic radios simultaneously. This method involved both hardware and software to perform the intended task. On the hardware side, a rack was built that provided power to all radios, as well as interface devices that connected each radio to a single computer. Software on the computer would then run the algorithm that was responsible for managing the update process on each radio. Normally, the user would need to directly interface with each individual radio by waiting for prompts and pressing buttons in order to start and finish a software update. However, the algorithm I designed automated this process so that a technician could click just a couple buttons on the software interface to execute the entire update process.

Again, this would be performed on multiple radios simultaneously. In our case, the rack that was designed had capacity for 30 radios; thus, as many radios could be updated in the same time it would take to update just one.

This was the first patent I have ever received or applied for. I believe we first filed for it in 2016, so it has taken roughly 4 years to see it through to approval. Since the program I developed has a potentially broad application to other projects, we felt it worthy of protection through use of a patent. Though I am unaware of any additional patents being sought at this time at United Radio, the Research Development and Innovation lab is always working on various new projects, and I am sure more patents will come from these efforts in the future.

Lastly, I would like to thank Mike Fabery for identifying my work as being patent-worthy, as well as Illya Shoykhet and Dave Hitchcock for their contributions to the project during the development phase.

Dan Marafino’s patent is for the vehicle interface solution developed in conjunction with Ron Bourdon for United Radio’s Radio Sales division. The interface was developed to allow installation of features such as backup camera, satellite radio, remote CD, and auxiliary cameras integrated with the factory infotainment system in late generation Ford and Chrysler vehicles. The interface was designed to work on multiple platforms with the same basic hardware, and to be updateable to newer platforms as they are released. The flexible hardware and updateable software allowed the product to be easily sold by distributors, and the product is currently being carried by many nationwide 12-volt electronics distributors as well as sold directly to United Radio’s large network of new/used car dealers and expeditors.

“We decided to patent this product as we found it was one of the largest volume commercial products ever distributed by the sales department, and we quickly saw competitors begin to start using the processes and technology we developed to develop and sell their own similar products.” said Marafino. This is the first patent awarded to Dan Marafino and the sales department.

The patent application was written by Marafino then adjusted for formatting and submitted by legal counsel in July of 2016. Due to the complexity of both the patent and the product, it was delayed for re-assignment, and ultimately required additional clarification and reviews before it was ultimately awarded in April of 2020. As the entire team in the Research Development and Innovation lab continues to produce new technology solutions for United Radio, they continue to evaluate which products merit application for patent in the future. The decision to patent is not an easy one, as there is a significant investment of both time and capital necessary, and as such not all products or solutions necessitate the process. Key criteria considered when applying for patents are return on invested capital, product life cycle, potential infringement, and market location.

Who had the last UR patent from Automotive Electronics?

Before the Dan’s, Operations Manager Mike Fabery had the last UR patent from the Automotive Electronics division. His patent, Satellite Radio Transfer Method is a method for adding a new radio receiver to a subscriber account.